Changing the World One Nerd at a Time 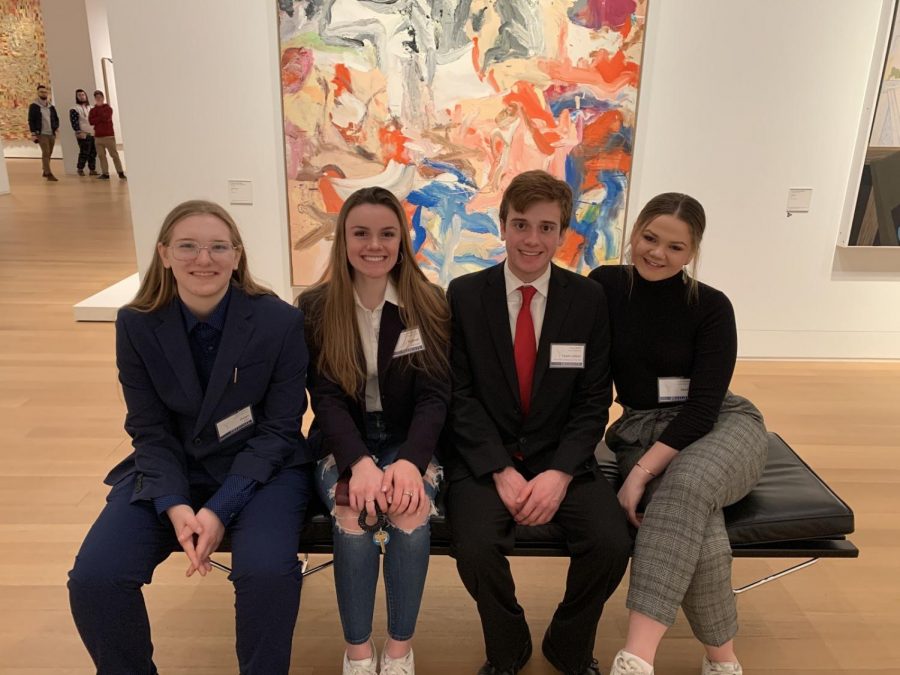 Hearing that 40 kids meet in the library on Fridays to discuss politics and international relations may not sound like a standard extra-curricular activity to most, and it definitely is not. The Model United Nations is a club run by students at Waterford, which engages them in real world issues to solve in an entertaining way.

The United Nations is an international body made up of 193 countries that have special councils to determine solutions for global and national issues. Here at Waterford High School, there is a club where this is modeled (hence the name).

Meeting Fridays in the library after school every week to plan followed by a conference once a month, students come with a chosen topic to debate and take their assigned country’s positions on the standing issue. There are formal debates where delegates talk about their ideas or positions in moderated caucuses mixed in with time to meet with others and discuss ideas in unmoderated caucuses. Countries with similar political views make alliances or blocs and draft resolutions to the problem.

The club is run by the students with their own government in place. Led by President David Sugrue, Vice President Owen Seltzer, and Secretary Sean Corman, the club has a strong student body that leads debate and conferences. Elections take place each year for positions, giving the club a political sense as the members choose who leads them.

The club advisor, Mr. Cheney, is a history teacher and has a strong background in politics. The Model UN club was started 10 years ago by two students who asked Mr. Cheney to be the advisor. With 10 kids at the beginning, the program has grown to 40 students .

Cheney finds Model UN to be an important club and beneficial to all students who take part.“Learning a lot about real-world issues and content is rare, but the skills developed are important real-world skills: public speaking, negotiation, compromise, thinking about issues from someone else’s perspective as political discourse is common but people need to see things from all sides.”

Members of Model UN feel as if they have improved by putting themselves out there and speaking in front of members of the club. It makes students look at issues from other perspectives as a delegate having to take the position of a country they do not always agree with.

Yale Model United Nations is a large event for Waterford’s club, as members are able to travel to the campus of the Ivy League school and take part in different committees that focus on various global issues. High school students all over the world come to participate in this conference with over 40 countries and 1,800 students presenting in 2020. Students come from schools such as Colombia, Australia, Republic of Korea, United Arab Emirates, Fiji, China, Turkey, Brazil, Costa Rica, and many more.

The conference is run by Yale students who take part in the college’s own MUN program, which gives participants structure and chance for good debate that leads to solutions for world problems. The chairs who ran committees were able to talk about college experiences, which gave insight to the high schoolers thinking about what to do post-high school.

Throughout the four day trip, there are also many non-committee activities that delegates can take part in. Yale Day is where students can listen to lectures on different topics led by Yale professors, visit museums, and tour the campus, workshops.There are many restaurants to go eat in with friends from school and new friends from committees.

Waterford came to Yale Model United Nations with 37 representatives, which is one of the largest delegations at the conference, and was able to represent powerful countries. Some of the countries included the United Kingdom, France, Syria, and Argentina. These were represented in General Assemblies and the Economic and Social Committees, which range from 80 to 100 people and deal with more broad issues on varying subjects.

Experienced participants entered small and more competitive committees where there are fewer participants and they focus on more specific issues. Some represent countries while others may represent important people in the world.

At the end of the conference, Waterford brought home two awards. President David Sugrue and Secretary Sean Cormon both received awards for their strong presence and representation of their country and political leaders in their committees. Advisor Mr. Cheney was proud of the delegates as it tied a school record for how many awards received in one Yale trip. He also was impressed because “we are going against prep schools where Model UN is a course where we are a club who meets an hour a week by volunteer.” For some participants, their performance is graded and they practice during school, where here it is by choice and enjoyment.

Both at Yale and Waterford High School itself, the Model UN club has made huge progress when it comes to educating young minds in the way of international relations and skills for the future while being entertaining and exciting.