The Magic of Disney Comes to Waterford 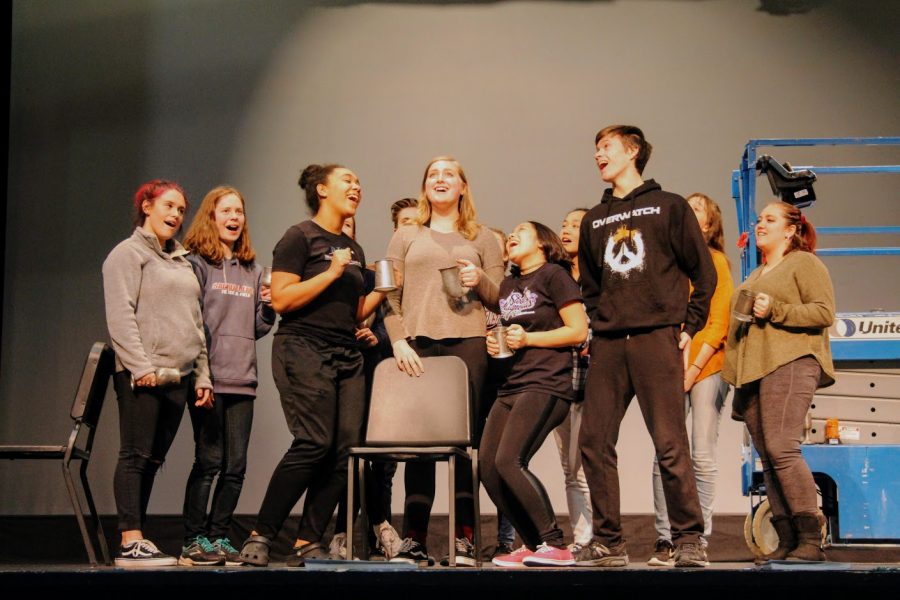 The upcoming WATERFORDrama production, Beauty and the Beast, is the program’s 55th production and the first Disney musical in the history of WATERFORDrama. Director Shane Valle said that he chose Beauty and the Beast because he wanted to do a show that everyone knew. He hopes that this show will bring a larger audience and grow the program. Mr. Valle hasn’t previously considered Disney when picking a show because of the size and cost of the productions. The program is not working with a massive budget, so costumes and sets that are unlikely to be reused are hard to warrant purchasing. Senior Katie Robillard, who is in the ensemble for Beauty and the Beast, says she is “excited to see everything look right.” The visual magic of the show transferring to the stage is a challenge for the program, but one they’re excited to show off. Truly capturing the magic of a Disney cartoon in a live performance is something that Mr. Valle has worked very hard on by utilizing costumes and an extensive set.

The classic story has been adapted from the animated movie to a musical, then from a musical to a to a live movie, starring Emma Watson as Belle. The show features a large cast portraying a small French village, enchanted objects, and the creatures around them. WATERFORDrama’s adaptation features Nina Pezzello as Belle, the daughter of a crazed inventor and heroine of the story, with Jared Linder as her father, Maurice. The grandest man in town who constantly seeks her hand, Gaston, is played by Jameson Kelly, and his dimwitted companion Lefou is being played by Jack Lange. The silly girls always on Gaston’s trail are played by Phi Kasem-Beg, Amanda Rowe, and Jadyn Lance. The asylum head, Madame D’arque, is played by Amanda Rowe and the rest of the townspeople are played by: Kassidy Gallagher, Holly Gray, Katie Robillard, Taylor Roy and Chloe Wilson, along with those joining in the coming months. In the castle, the head of household, Beast, is played by David Sugrue. His most loyal servants, Lumiere and Cogsworth are played by Dom Brunaccioni and Justin Wujtewicz, respectively. The steamy maternal figure, Mrs. Potts, is played by Lily Watson, and Lumiere’s lover, Babette, is played by Murphy Ryan. The opera singer-turned-dresser, Madame de la Grande Bouche, is played by Avital Goldberg-Curran.

The decision to do a Disney production came as a shock to the cast, as Director Shane Valle had previously said that he would never do a Disney show. Regardless, the cast is extremely excited to bring Beauty and the Beast to the stage and the majority of them watched the show growing up. Katie Robillard remembers watching the movie with her sister almost weekly and pretending to be Lumiere and Cogsworth. For Nina Pezzello, her role as Belle is a dream. She has wanted to play Belle her whole life. In fact, Beauty and the Beast was the first show she ever saw and inspired her love of theater. Justin Wujtewicz is psyched about doing Disney and says that he has been a “big Disney fan” ever since he was a little kid.

Since the graduation of several WATERFORDrama regulars last year, the program has had a shortage of guys in the program. The department welcomes anyone who wants to join as long as they’re willing to do the work. To anyone on the edge of decision, Justin says, “You’ll have a great time, make a lot of friends, talk to a lot of people, it’ll be a really fun time.” Senior Dominic Brunaccioni has been with the program for four years and says it has helped him to develop public speaking abilities and get along with people. As the president of the drama program, Dom spends a lot of time trying to recruit new people for the shows. His message to guys is “I can say without a doubt, drama is the best thing you will ever do.”

Rehearsals are daily, ranging from two to several hours in preparation for the massive musical numbers, such as Belle and Be our Guest. As of now, the cast is understaffed and many cast members have multiple parts. The cast is working hard to bring Waterford a Disney production to be proud of. Tickets are available at the door and during lunches and study halls. The cost is $7 for students and $12 for adults if tickets are pre-purchased and $10 for students and $15 for adults if purchased at the door. The show is running from Thursday, May 2 through Saturday, May 4.