A Look Into the Pre-Production Process 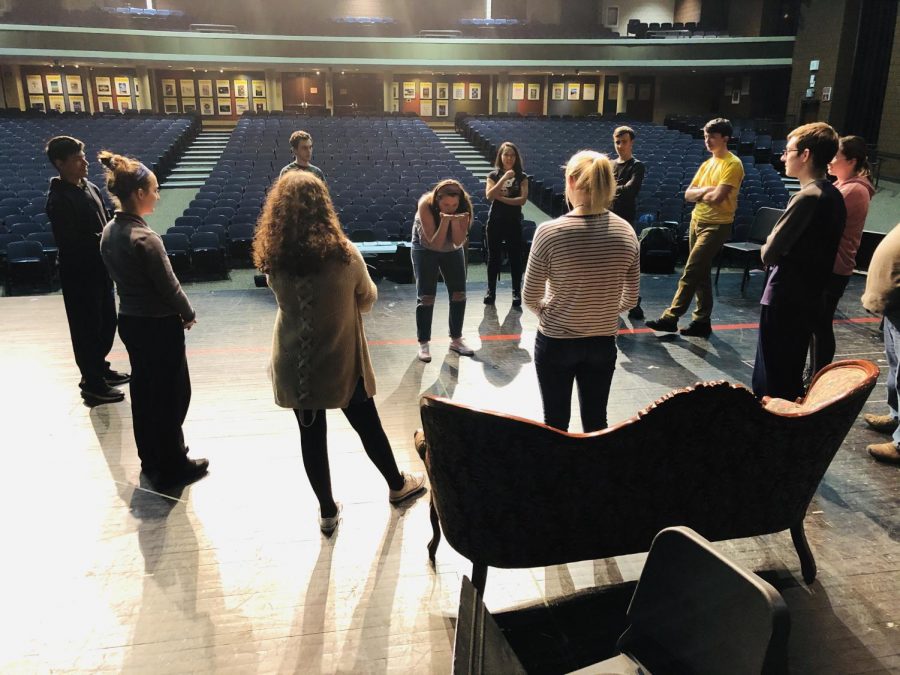 Not even a week after WATERFORDrama’s sold-out production of The Spotlight Cabaret, drama director Shane Valle sent out an email detailing the upcoming winter play auditions. Not much information was divulged, just to sign up at the end of the drama hallway and to prepare a short monologue. There was no mention as to what the show was going to be, or even if it would be a comedy or a drama. For those who have auditioned before, this secrecy is just a normal part of the process. But for the inexperienced, knowing what to do can seem daunting. Some veteran drama students offered a look at the audition process.

Junior Emily Robillard who has been a part of four shows during her time at WHS, says that “the best way to prepare . . . is to practice your monologue a LOT. Choose it as soon as you can, and practice it every day.” The monologue is the centerpiece to an audition. The auditionee should embody the character and the setting of the monologue. Yago DeFonseca, a freshman, made his on-stage debut for WD in the recent Spotlight Cabaret. He found that his walk from home to school and back was the perfect time to practice his songs, and now his audition monologue.

“Walking into audition day is nerve wracking,” says junior Murphy Ryan. “Even for me, and this is my third year!” There is a whole lot riding on that monologue, and it’s no surprise why the butterflies in the stomach start to appear. Jameson Kelly, senior, says that he faces his anxiety with a smile and tries to do the best he can. He says, “Even if you fail miserably, only three people will know, and you’re one of them.” Kelly’s statement embodies the spirit of theater: take risks. It’s easy enough to not put in the work, but when the show comes together it becomes worth it.

Once all the auditions happen, the real work begins. Valle considers casting one of the hardest parts of creating a show, and it’s no wonder why. The people chosen for the cast dictate how smooth the rehearsal process goes, the chemistry between cast and crew, and, perhaps most important, how characters are portrayed. “Sometimes I can cast an actor in a specific role easily based on what I see,” he says. “Other times I may need to take a chance on a specific actor and think about what they may be capable of.” While an actor may have performed past roles well, it doesn’t necessarily mean they’re going to fit into every show. Valle states, “At the end of the day, casting is a gut decision.”

Almost immediately after audition dates are announced, Valle receives a stream of messages asking about what the show will be. Auditionees and audience members are left in the dark. Valle has two reasons for keeping the show secret. The first being that he does not “want an actor to come into an audition hoping for a specific part.” He gives an example: say if WD were to put on Grease, a girl may have her heart dead set on playing Sandy, but Valle might see in her audition that she was better suited for Rizzo. His second reason is that sometimes the cast of auditionees helps him determine which show to choose. If only three guys audition when the show calls for eight, that show won’t be picked. Sometimes even Valle doesn’t know what shows he’ll pick!

Valle says the most important things to consider when preparing for an audition are to “do the research” if the show is announced beforehand, and “if you don’t know what the show is, just go in doing your best at creating a really believable character.” This concept is something Valle drives home from the first information meeting: students need to put in the effort in order to be a part of the shows. In fact, one of Valle’s pet peeves when it comes to auditions is “people who are not prepared enough.” He believes that “if you sign up … then get to work. You want to do it, show us how bad you want it.”

His high expectations are how Valle manages to put on quality shows year after year. The bar is set high, and students who stick with the club know how exhausting it is to meet those expectations. The work put into auditioning, memorizing the monologue and becoming the character, is worth the effort.