Millstone: Past, Present, and Future 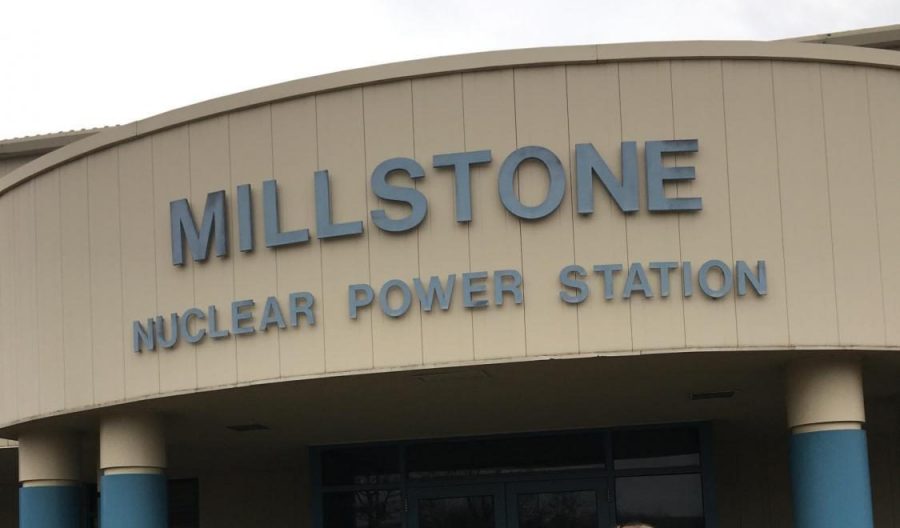 For many residents of Waterford, the Millstone Nuclear Power Plant is nothing more than a restricted area in the southwest corner of town. However, the land the plant sits upon has a rich history. Millstone Point used to be a quarry for high quality granite. Some of the granite mined at Millstone Point can be found in the base of the Statue of Liberty and in Grand Central Station in New York City. The old site of the quarry is now the site where water is discharged from the nuclear reactors back into Long Island Sound. This land is home to the only nuclear power plant in the state of Connecticut.

Millstone itself is comprised of three nuclear reactor units, two still in operation, that, according to information from Dominion Energy, together create more than two gigawatts of electricity, which is enough to power half of Connecticut. Just one nuclear reactor has the capacity to power holiday lights wrapping around the world more than 27 times.

At the most basic level, nuclear power plants generate electricity by using uranium rods to convert water into steam, which is then used to spin a turbine. In its training building, Millstone has a fully-functioning model reactor that creates real steam to drive a miniature turbine at a speed of roughly 4,000 rotations per minute. Just a mile down the road, the real turbine used to generate electricity for the grid is a little bigger, comparable in size to a house.

The two operational nuclear reactor units 2 and 3 were originally licensed in 1975 and 1985 for 40 years by the North American Electric Reliability Corporation (NERC). Recently the NERC approved requests for 20 year license extensions. Nuclear reactor units 2 and 3 will now see their licenses expire in 2035 and 2045 respectively. Dominion Energy and the State of Connecticut also secured a deal in which Millstone will continue to provide energy to the state for the next 10 years. After the 10 years are up, it will be up to Dominion Energy to decide whether or not it is viable to keep Millstone running from a financial standpoint.

It is impossible to predict whether or not the licenses will be extended again, but engineers at the plant said during a tour last month that their actions in terms of maintenance and upgrades are done with the goal of having the extensions granted. To extend the licenses, the plant must submit a plan on how it intends to deal with the aging parts of the reactor and its components. Millstone keeps the aging plant safe through preventative maintenance, meaning that everything is inspected and replaced after a specified amount of time, as opposed to just fixing something when it malfunctions. Over the course of an 18 month period, every single part of the plant will have been inspected at least once to ensure it is operating in the way it should.

The attention to safety was not always as clear. Back in 1996, Millstone was the second nuclear power plant ever to be convicted of felonies, after the Three Mile Island Incident in 1979. The plant was hit with a record $10 million fine, the largest penalty ever at the time. The felonies were related to mismanagement and the falsifying of records between the years of 1992 and 1996. An investigation at the time found that a large number of employees had failed licensing tests and had not accrued enough training hours, but were still on the job. Employees at the plant today acknowledge the failures of the past and say that things are done a lot differently today. In addition, the plant is under new management than it was in the past, Millstone was purchased by Dominion Energy in 2000.

Today, safety is considered the number one priority at Millstone, even higher than the production of electricity. The plant has procedures and step-by-step plans written for nearly every event possible. This includes procedures to shut down the plant when big storms come through and cause damage. Engineers that work in the control room of Reactor Units 2 or 3 have eight day training sessions every five weeks to ensure that they are prepared for any situation that may arise. Training occurs in full-scale, exact replica simulators that Millstone has for both of its reactors, run by computers that simulate reactions from the reactor.

A tour of the plant confirmed that rules regarding safety are numerous and strictly followed within the plant. Security is extremely tight inside and around the gates, and visitors need an escort with them at all times while on the premises. All employees working at the plant must wear a Thermoluminescent dosimeter (TLD) that monitors radiation levels at all times, as well as pass through a machine that checks even further for any traces of radiation upon exiting the premises. Communication between workers is set up to decrease ambiguity and eliminate miscommunication errors. Even when walking on stairs, workers are required to take any stairs one at a time and have their hand on the handrails at all times. The regulations may seem tedious or mundane at times, but as a whole they ensure that the plant runs safely and smoothly, officials say.

Millstone closing could be completed in one of two ways. The first way is an immediate shutdown, the buildings would be torn down and leftover nuclear fuel would be kept on site in special containers to limit the release of harmful radioactivity. The land could even be repurposed and developed. The other option is known as Safe Storage and would see the plant shutdown and the buildings and fuel would remain for at least 50 years to allow the radioactivity to decay. Currently, the closed nuclear reactor unit 1 at Millstone is in Safe Storage.

For Waterford, Millstone pays roughly a third of the town’s 93 million dollar annual budget. It is what allows Waterford to spend an average of $1,050 more per student per year when compared to East Lyme, Groton, New London, and Montville, according to public budget documents released by each district.

As soon as the plant stops operating, it immediately loses its value, and a drop in value means a significant drop in taxes paid to the town of Waterford. Loss of tax revenue from Millstone would be devastating particularly to the Waterford Public School system, whose budget is nearly 50 million dollars each year. In a school district where the costs of maintenance and supplies are already kept at a minimum, school administrators say that a loss of funding would be made up for with faculty layoffs, especially considering the decrease in population Waterford has seen in recent years.

As a town alone, Waterford does not have much influence in deciding whether or not Millstone will continue to operate, those decisions fall under the authority of the state of Connecticut. What Waterford hopes to do is establish a committee to complete a study on the benefits that Millstone has on the southeast region of Connecticut, which could then be presented to the state to convince them to continue support for the plant

Even though a potential closure of the plant is still years down the road, Rob Brule, the town’s first selectman, says he is taking measures to prepare now. He explained how the town of Waterford has been putting roughly one million dollars aside for the past few years to offset lost revenue in the future. He also pointed out that Waterford has been able to absorb significant losses in tax revenue in the past through careful planning, and that it could be done again.

Right now as first selectman, Brule is working to make the town of Waterford more friendly to both businesses and families. He believes that the stronger Waterford is economically and in terms of its population, the more prepared it will be to deal with the plant’s potential closure. Brule and other town officials regularly make visits to many of the more than 600 businesses around the town to express their gratitude for their decision to do business in Waterford. His ongoing projects to build a town center in the Civic Triangle as well as build new restrooms at the beach reflect Brule’s commitment to making the town a favorable option for those looking for a place to raise a family. Ensuring that Waterford has a strong population of businesses and families is critical in keeping the town alive should Millstone shutdown.

Outside of Waterford, the loss of Millstone would prove devastating to the economy. Millstone, according to Dominion Energy, puts more than 1.5 billion dollars into the Connecticut economy each year, as well as employing roughly 800 full time workers and supporting nearly 4,000 in-state jobs. There are a whole host of contractors who work directly with Millstone, providing services such as welding and pipe fitting.

Millstone also makes significant contributions to the communities in addition to just jobs. Each year Dominion allocates more than $500,000 to the plant for use in the community, mostly in the form of donations to nonprofits, including organizations such as Safe Futures and the New London Community Meal Center. Employees of the company are also active volunteers in community events. Dominion gives employees eight hours a year of company time to go out and volunteer, with even more opportunities popping up through a whole collection of company sponsored events. Additionally, the company has a program in which employees who put in a certain amount of volunteer hours can have the company donate money to a charity of their choice.

Many of the employees at Millstone conveyed their satisfaction in their job and with Dominion. Millstone provides a stable, well-paying job to those coming right out of college. Most engineers at the plant graduated college majoring in mechanical or chemical engineering, but those degrees are certainly not a prerequisite. Jobs at Dominion Energy include areas of finance, physical and information security, administration, and environmental science. Engineers said that at first starting in the nuclear industry is daunting, working with such complicated and powerful infrastructure, saying that it takes at least five years to become familiar with everything needed in one’s job. However, once that experience is acquired, a person is invaluable to the nuclear industry and skills can be transferred for use at other nuclear power plants across the nation.

Millstone offers multiple programs to help train the next generation of nuclear engineers. Each year Dominion hires more than 225 paid interns from all across the country. Most relevant is the partnership that Millstone has with Three Rivers Community College in their Nuclear Engineering Technology program. The two-year program that sees students leave with an associates degree in Nuclear Engineering Technology includes a 12 week co-op employment at Millstone. Each year Millstone sponsors up to 16 full-ride scholarships that cover the full cost of the program, including tuition, books, and even a monthly stipend. The program prepares students for the position of entry-level technician for the commercial nuclear power industry.

Millstone touches every part of the Waterford community and its closure would bring about significant changes to the town’s identity. Dominion Energy with its outreach programs is working to advance the nuclear industry by engaging with its community. Millstone is a symbol of the technological boom of the post war years. Now as its technology ages, the question of what the future holds, remains.