Why does this election feel so important? 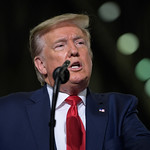 The 2020 presidential election is one of the most unpredictable because of the division in our country. The two parties are so split and the tension surrounding it is heavy. Compared to past elections more people are voting and they are doing it earlier. According to The University of Florida, over 52 million people have voted before Election Day, with over half of those ballots being in the mail. People who have never voted before are weighing for this election.

Many people believe that voting does not matter, that their vote means nothing. It is understandable to think that way, with over 300 million people in America, does one vote really matter? When you think like that, no. One out of 300 million does not make a huge difference.  According to FiveThirtyEight, a poll data website run by ABC News, “between 35 and 60 percent of eligible voters don’t cast a ballot.”

The American voting system does not make it easy to vote. The rules for voting in the U.S. can be harsh and even confusing at times. Some mail-in ballots may be miscounted or even thrown away if one thing isn’t done correctly, like the envelope not hiding the identity of the sender. Polling stations can be very far, even hours from people’s homes. Not only that, waiting to place your ballot could take hours, many people do not have the time to wait that long with work and school. Those in low-income communities are less likely to vote, and with how long it can take, it could simply be impossible for them to do so.

The divide in the country is so strong right now. According to TIME, “Almost 80% of Americans live under unified, one-party rule.” With the coasts being majority Democratic and the Midwest and south being Republican. America has always had that division with its two-party system. This year it is more about the nature and tension of the divide. This election is not as much as the candidate’s policies, but their character and personality. Yes, there are some focusing on a candidate’s policies, there is more of a watchful eye on how the candidate acts and presents himself.

One reason for this could be Globalization: It is the interconnection of the world. With new technology being developed and jobs becoming unnecessary, many are left behind. Things are becoming more advanced and people are beginning to feel obsolete, they feel culturally, technologically, and economically they are being left behind.

This is why many may agree with Trump, not because of his policies, but because they feel like they are being left behind. The other side can be seen as a bunch of elites and they may feel unrepresented by that standpoint. For them, Trump may be the better option because Biden and the democrats are too much of that elite. On the other side, Biden supporters see change as a good thing. So much is happening in the world and people see how dramatically everything has changed. With a more diverse and younger pool of voters beginning to vote, there is a huge shift.

In 2016, Trump was running against Hilary Clinton and won. During the 15 days before the election, Clinton had an 86% chance, with a lead. This is all very similar to Biden’s current numbers. During that 2016 election Clinton won the popular vote, but in the end, lost the electoral college. Although Biden is currently leading in polls, with an 87% chance, it is still possible for him to lose the electoral vote.

But there are many differences between the 2016 election and now. The biggest difference being the fewer amounts of undecided voters and the larger amount of people voting. As well as the uncertainty of mail-in ballots, this election is  different from any past one.