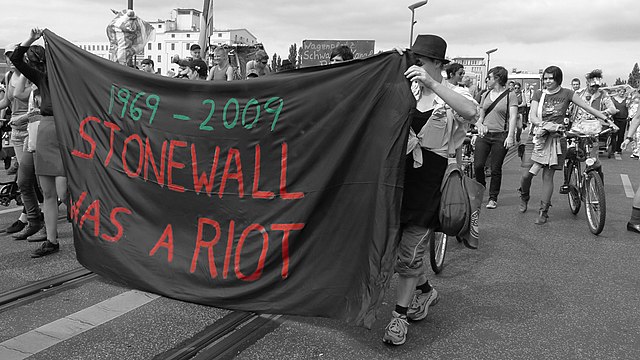 We often think of issues relating to identity – queer and transgender rights, for example – as being seperate from other social and economic issues. We think of each issue as being its own little niche that need not be expanded. This view, though common, couldn’t be further from the truth. The issue of gay and transgender liberation is tied together with issues of race, ethnicity and class, and the history of the Stonewall Riots proves this.

The Stonewall Riots were centered around the gay bars, vibrant centers of queer and transgender culture, and were one of the only places queer and trans people could express themselves freely. However, the majority of these bars were not owned by queer or trans people; many of them were owned by gangs like the mafia, who bribed the government into letting them operate such illicit institutions (as gay bars were considered back in the day). According to the website History, “Without police interference, the crime family could cut costs how they saw fit: The club [Stonewall Inn] lacked a fire exit, running water behind the bar to wash glasses, clean toilets that didn’t routinely overflow and palatable drinks that weren’t watered down beyond recognition. What’s more, the Mafia reportedly blackmailed the club’s wealthier patrons who wanted to keep their sexuality a secret.”

Despite being a center of queer and trans culture, the gay bars were, from the perspective of their owners, nothing more than a racket. But from the perspective of their patrons, they were the only place they could go where they could truly be themselves. Nearly everywhere else, being openly queer and trans had been criminalized; “In New York at the time, it was nearly impossible to be openly gay. Same-sex dancing was banned, and bars weren’t allowed to serve alcohol to gay people. If people wore fewer than three items of clothing of their assigned gender they could be imprisoned. This, alongside constant harassment by police and members of the public, made being gay dangerous and sometimes deadly.”

All of this, alongside violent police raids on gay bars and the brutal murder by police of a gay man a few days before, led up to what has come to be known as the Stonewall Uprising. For five days, gay and trans people courageously took to the streets and battled with the New York City Police. The cops threw tear gas and cracked peoples’ heads with batons and were responded to with rocks, bottles, bricks, and in some cases, molotov cocktails (a type of improvised firebomb).

After the Stonewall Uprising, a number of pioneering gay liberation groups were formed. One of those groups was known as the Gay Liberation Front. But it was much more than just a gay rights organization. The GLF, according to one of its founding members Harry Hay, was “in total opposition to America’s white racism, to poverty, hunger, the systematic destruction of our patrimony; we oppose the rich getting richer, the poor getting poorer, and are in total opposition to wars of aggression and imperialism, whoever pursues them.”