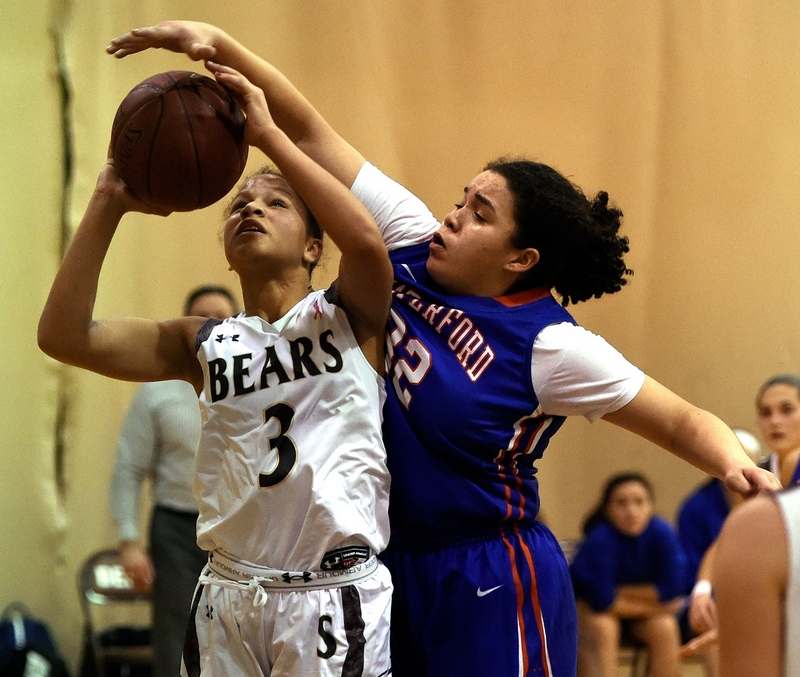 Marilyn has been playing basketball since she was nine. She says, “I play basketball because it’s an outlet for me and it’s something that I excel in and it makes me feel good about myself”. Marilyn is a dedicated student on top of being an athlete. She says, “I do my homework as soon as I get home, sometimes I bring homework on the bus on the way to away games.” Being a role model and mentoring younger players is important to Marilyn, “I just make sure that everybody feels included, and making sure they’re in a good space mentally and seeing if there’s anything I can do to help them out. I care about my teammates, I want to make sure they’re happy.” Over the course of her high school career she has had 3 coaches in 4 years, “I’ve had to adapt to the different coaching styles, and it hasn’t really affected how I feel about the team as a whole. It takes some adjusting, but once I got acquainted, the season would start to pick up. Each coach has taught me something different, and each has taught me something important.” As her senior year continues on, she says she is excited for everyone to come together and to see how people will grow as leaders. Marilyn plans to study either women’s studies or art therapy in college.

Marilyn Childs is bringing her leadership to the court this season as a captain. Her senior year has been a hard one. On senior night last year she caught a pass and landed awkwardly, resulting in a horrific injury to her knee. She tore her ACL and damaged other surrounding ligaments. Marilyn had surgery to repair her knee and thought she was on the road to recovery. Then she noticed that her leg was bleeding and was rushed to the hospital and had to have a second emergency surgery. She found out later that the first surgery had resulted in a staph infection and had weakened her body. If they had not caught it as soon, the staph could have killed her. Marilyn is not the first Waterford player to do their knee. Former guard Lili Stoddard tore hers during her junior year and junior guard, Amy Pinch, tore both her right and left ACLs during her softball and AAU seasons. The process of getting back to the court is a long one as an ACL injury usually takes about 9 months to get back to playing. Marilyn’s mindset has changed a lot because of her injury. She said, “I have to remind myself that I made it, and I need to take it one day at a time. I now take time to celebrate the accomplishments. It’s about the little things. I don’t take anything for granted.”