Playing Out the Quarantine – One Block at a Time 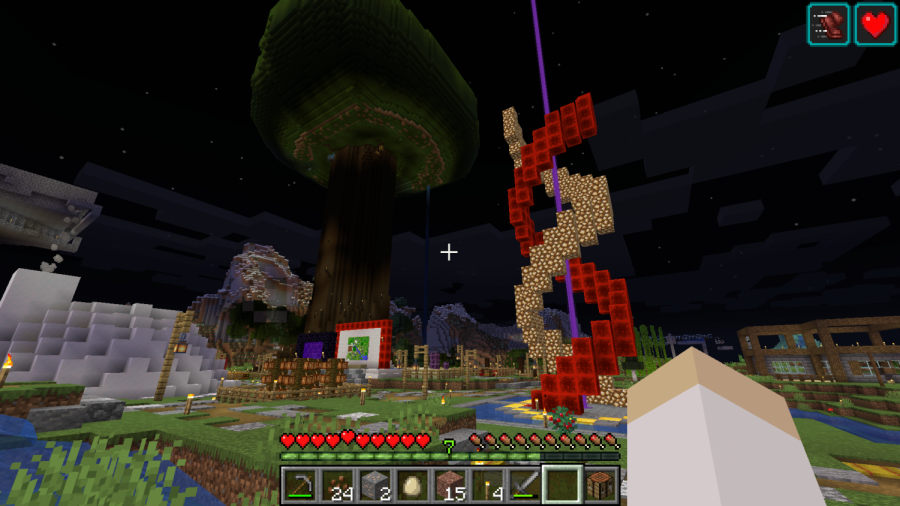 Social distancing measures have forced teens to develop creative ways of hanging out and talking to each other. In the age of technology, such a feat is more possible than ever. Many teens are finding some sort of respite in social media and video chatting. However, for those who both miss their friends and enjoy playing video games, one option jumps out with absolute clarity: Minecraft.

Minecraft is a standard childhood experience for today’s teens. Some people have not stopped playing it since its release, whereas most have probably taken a break as new priorities in their life have demanded their attention.

However, the world we are currently living in and will be living in for the foreseeable future features a whole lot more free time, and a whole lot less socializing than we’re used to. As a result, Minecraft is now at the forefront of some teens’ minds once again.

In Minecraft a player can create worlds for themselves and their friends to play in and do a multitude of activities, from building houses and digging mines to fishing, riding horses, fighting dragons, and creating potions. Minecraft provides a way for you to see somewhat physical versions of your friends and do activities with them. Even if these activities aren’t as fun as the real thing, you can’t exactly build towns with your friends in real life.

Many students in Waterford High have created their own ‘servers,’ or invite-only worlds with just their friends. Senior David Sugrue brought back his Minecraft server shortly after the break from school began. “It’s fun to be able to still talk to my friends even when I can’t see them in person,” he says. “I love Minecraft but I feel like this is also something really valuable we’re able to do.” David’s server has amassed many users since its start, primarily juniors and seniors but also some family members of users as well, allowing players to make friends out of strangers.

Another student who has started a Minecraft server during quarantine is senior Peter Filip. Filip’s server currently has 13 participating members, most of them also seniors at Waterford High but also including some people from larger social circles. Filip has erected a large sign on his server that states its high-minded goals: “This server was created in order to band together friends and family in Minecraft. I had the desire to found a territory where everyone could express themselves, and where all could find a home. We ask members to respect the communal land in the middle of the territory. We hope you play respectfully,” he adds, before listing the formal rules of the server. While the seriousness these players adopt may seem a little strange or silly to some, it is hard to ignore the potential benefits of such a platform. Through Minecraft, teens are able to interact on a level deeper than simply texting or calling on the phone. They are given a sense of community, even when the real-life community of Waterford is taking a hard hit.

It’s not just people in Waterford that are using Minecraft to cope with the new social standards. Japanese twitter user @backyennew shared pictures of a graduation ceremony his son and his friends made for their classmates in Minecraft. While perhaps a far cry from the real thing, it remains a creative way to adapt to the changes we are experiencing every day.

Minecraft has proven, in these trying times, to be a unifying substance. People are able to bond closer with their friends and their communities, they are able to continue their social lives to a degree, and they are even given the option to play games with people across the planet from them. Who knew Minecraft would be the great globalizing force? Strange times indeed.