WATERFORDrama Techies: Life Behind The Scenes 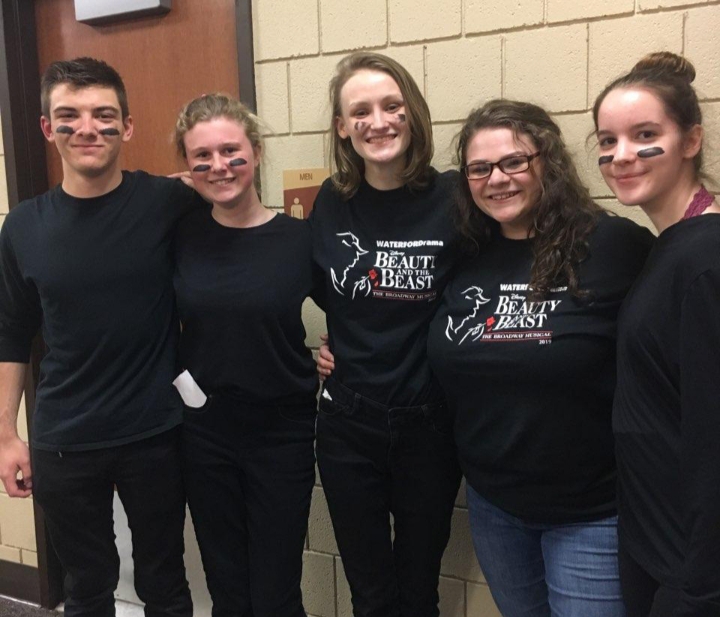 Actors are obviously part of every drama production, but there would be no show without a stage crew. WATERFORDrama’s backstage crew has been given the title,“Techies.” There are multiple jobs for techies. Anneliese Adams explains, “I have been up in the booth giving cues to lights and sounds along with being in charge of a slide show for the Laramie project. I have also been stage manager in a plethora of shows which has been my favorite thing to do as a techie.” Techies do much of the unseen work, including set changes, lighting cues, sound cues, hair, and makeup.

One of the positions backstage is the stage manager. The stage manager has a lot of responsibilities such as, coming up with a backstage plan for techies to make the production a success. The stage manager for Beauty and the Beast was Anneliese Adams. She worked hard and deserves a lot of credit for making the musical a success. Adams explains “We may have to work our butts off but the reward that follows the shows are indescribable.” Even though you are not performing, techies are just as much a part of the production as the actors. Adams commented, “I love being a techie because we are the heroes of the theater world.” The actors and techies work together as a team to pull everything together for the show.

If a student doesn’t want to perform but still wants to be a part of Drama then being a techie is perfect, as Brandon Cable explains, “a techie is definitely a great place to start.” If you’re thinking about acting in the future you can learn the ropes as a techie. Since becoming a techie, Ana Hart expressed, “My favorite thing about being a techie is that you get to work with amazing people. You create a type of bond that’s irreplaceable, it’s like one big Drama family.” You make new friends by joining the WATERFORDrama family. Hart later said “The incredible moment you share with the cast and crew at the end of the show is proof that hard work pays off.”

Techies also make many memories and experience hilarious moments. Adams stated “My favorite memory as a techie is just the funny moments that happened back stage! Like dancing with the actors or crew and silently belting out the leads songs.” These memories will last a lifetime. Rebecca Cameron said, “the feeling you get is like after winning a game and having an undefeated season because in WATERFORDrama we never lose, we always win. Since the beginning of the first season we’ve never lost.” Caitlyn Liu explained “I felt really happy after the show because after all of the practicing and rehearsals, we managed to pull it off with good results”

Hart finally said that, “If anyone is thinking about joining stage crew for WATERFORDrama, I say, definitely go for it! We’d love to have you.” Everyone is welcoming, which makes it much easier to get involved. If anyone is interested in being a techie for any show next year, you can contact Shane Valle at the WATERFORDrama email [email protected].