Students in the Class of 2020 who started French in the sixth grade have had eight teachers: a gym teacher, two retirees, an Algerian native, a middle school teacher turned French florist, another middle school teacher, a transfer from Montville, and now Miss Wasilefsky. The French program at Waterford has been in constant flux. This year, Miss Wasilefsky. has come from New London High School to fill the role of the needed language instructor.

After working at New London High School for two years, Wasilefsky applied for the vacant position. She became a French teacher because she was influenced by native speakers: “I went to France for class, and met French kids my age. We became friends and I immediately fell in love with the language.”

While Wasilefsky claims the transition from her previous school to ours has been swift and easy, the interview process was not nearly as effortless. After battling through two lengthy interviews with many questions, she taught a class to French four with administration present. Miss Marchese, Spanish teacher and World Language department head, spoke well about Wasilefsky, stating that “students responded to her well, even as she spoke almost entirely in French. We knew she would be a good fit.” This was her final step before being hired, and the hardest for her. “I had a concussion, but pushed through it,” Wasilefsky stated, which only goes to show how far she would go for the job.

Wasilefsky is now the face and future of the French program, which also means a lot of responsibility and frankly, pressure. The classes struggled in the past with a lack of structure and learning, leading to a low number of students taking AP French, but Wasilefsky is not worried. She has goals for the program, explaining “I hope they take AP French, as even though it may seem scary, I try to make it a seamless transition from French 3 all the way to it [AP].” Wasilefsky brings a sense of optimism as well as ideas, such as a multicultural dinner she wants to host, to get students more open to French and other cultures.

Wasilefsky has proved she will be a good thing for the language department. Students already have a better attitude towards their French classes and administrators such as Miss Marchese and Mr. Hauser believe “she is the best fit for the French program.”

Miss Wasilefsky may be the solution to the chaos in the French program. Annie Seltzer, French 3 student expresses her newfound interest in the class, stating “ Miss Was makes learning french interesting and I can’t wait to continue to AP French. J’adore français.” With improved attitudes and a structured class brought upon by a new teacher, things are looking up for the French program at Waterford High. 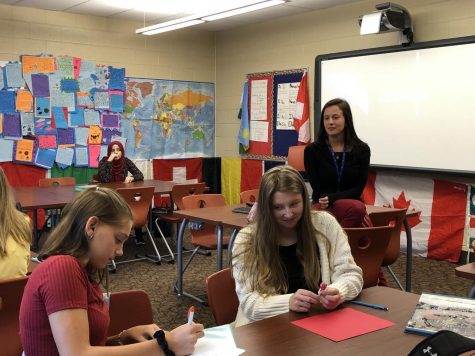